We have been away for a while, it is for a reason. I have the pleasure today to welcome to Center Stage, Louis Lowy author of the darkly humorous book “Die Laughing”. 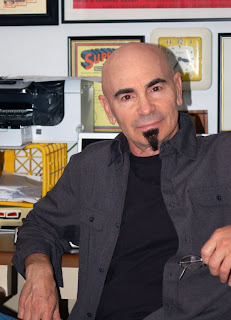 We have a saying in my corner of the world. “The speech is in the eye.” I generally always believed that the quality of the person can be sensed if you look into the eyes. It is an art my people have developed and that has helped me in a lot of ways. I needed to have an idea of the person of Louis so I asked as usual with all my guests for his photograph. I am sure I must have embarrassed him with my responses later. So I took one look into the eyes of Louis Lowy and saw a world of compassion, humor and laughter with a bit of ‘tongue in cheek’ question in those eyes. I would thus wish to share him with you on this page. 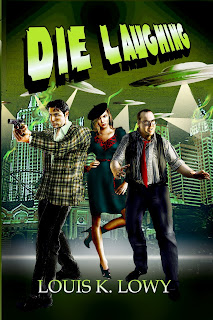 ‘Die Laughing’ started deceptively enough. I first smiled, chuckled and then laughed. The hook was in, I might even die laughing, only the confusion of Sam E sneaked up on me. I was no longer smiling, I scratched my head as with the ease of a skillful story teller Louis told me an ‘onion’ story. He used his book to share with me life, even the agonies of tentative love affair with Cricket,(what is in name?) held me sometimes painfully amused, scared and even impatient with Sam E. I felt his pain and shared his emotional tensions as he tried desperately to understand his mother, forgive her and love her. It was not anything physical but the damage to the responsibility of Motherhood was clear to me through the memories of Sam E. Sam E never needed to tell us anything, he just felt his way through the sick horror of Francis, the Aliens who he really should thank for their green ugliness and Cricket. His bumbling loyalty to his friend and manager. It is a book I would wish to recommend to my Nigerian friends. Here in my country we still look at fantasy stories with the suspicion with which we regarded the Western world. There might be something in building a fantasy world where we could deal in Louis fashion all those frightening gods and goddesses that had made life an embarrassment and a dread. These were some of the emotions that Sam E went through.
Please enjoy my conversation with Louis Lowy
1) Please may we know you a bit more?
I was born in Pittsburgh, Pennsylvania in the United States, moved with my parents to South Florida when I was around five. I grew up in Hialeah (home of the racetrack), which is just outside of Miami. I worked as a firefighter there. I also played bass guitar in many bands, mostly original music. My most well known band was Hemlock which had the dance hit “Disco Break.” I currently live in Miami Lakes (still south Florida) with my wife and daughter. Our son is studying Asian literature in Japan and our daughter is attending a local college. I’m currently studying to get my MFA degree in creative writing at Florida International University.

2) Die laughing reads like an ‘onion story of subtle layers of the person called Sam, it demands we read more to the apparent first layer. how did you achieve that?
Great question. I set out to write a story about a man – comedian Sam E. Lakeside – trying to find his sense of self-worth. Due to his lousy childhood he’s lost not only that, but all the things that come with it: the ability to develop true and meaningful relationships, a confidence that is more than skin deep, and a sense of being loved for himself not his onstage persona. In order to break through all those barriers he had to go through a series of self-awakenings that came about partly because of the burden he was going through and the decisions he had to make. The catalyst that started the process was the mist that he was exposed to by the space creatures.
3) What genre of writing will you classify your novel? How long have you been writing?
Honestly, I didn’t set out to write in one genre. I set out to tell a story. I used elements from many genres: sci-fi, mystery, suspense, noir, and everything in between. My main goal was to write something that would hopefully have depth and at the same time keep the reader interested enough to keep turning pages. To your second question, I’ve been writing seriously for about four years.
4) Sam E is a lost boy, a comedian. an idealist as well as a cynic which is he actually?
He’s a little of each, and I’d even throw in a bit of a romanticist. At times it’s hard to see, but he truly longs for a real relationship.
5) Die Laughing is unusual, yes I said that before because I keep getting the feeling that it is a commentary on the human society, can you enlighten me?
I never thought of it like that, but I can see why you’d say it. Because my story takes place in the 1950’s I decided that I wanted to portray the people as I believed they would be in that time period, that is, male and female roles in society and their racial views. During that time period in America it was a man’s world. Women’s role was largely subservient to the man’s. Sam E. could get by being somewhat flippant in his attitude to the opposite sex and get away with it. Women, on the other hand would have been frowned upon if they acted the same way.
Racial attitudes were different then. Derogatory terms were thrown around more loosely than they are today. It’s a much sensitive society today – and thank goodness that it is – than in the fifties. I let my characters be less attuned to that sensitivity. Going back to the story, I felt it was important not to emphasis or deemphasize the 1950’s values, but to let my characters and their surroundings play themselves out in a manner that was as true to that era as I could make it.
The story also deals with power, greed, control, and the pop culture of that era. Certainly they say something about not only that period but society in general.
6) The human mind has been pre-occupied with the UFO’s , which view shall we hold? Francis? Who wants to see them as avenues for money, Sam E? or the sneaking feeling that you want us to see sci-fi as something more?
That’s the wonderful thing about UFO’s, alien life and the unknown. There is no one viewpoint. The truth is in the eye of the beholder. I think that’s the way it should be.
7) Share a writing day with us, and if you have fixed hours of writing.
I’m normally a much disciplined writer. I write a minimum of two hours a day, six days a week. I usually start off anywhere between 10 a.m. to 11:30 a.m. The first thing I do is make a cup of hot tea or coffee to take with me to my office, which is decorated with things that allow my mind to open up, like old movie posters, figurines and action figures, childhood models, and of course, my books.
The second thing I do is enter in my writing log, which is on my desk near my computer, the date and starting time. I don’t cheat on my two hours. If I leave for ten minutes then I add ten minutes to the time.
The final thing is the hardest: concentration. It can be difficult because your mind wants to play tricks. It’s simpler not to concentrate, so if you’re not vigilant you’ll think of a thousand excuses to let yourself wander. That’s pretty much it. The rest is to keep plugging at it.
I will add one caveat, since Die Laughing was published I’ve had to put my writing schedule on hiatus for a time to keep up with the release and everything that goes with it.


8) In my neck of the universe, our pre-occupation is far removed from sci-fi , fantasy and such science based stories, how can we make these genre of writing popular and thus acceptable?
Hmmm, I think the best way would be through exposure. If people have the opportunity to experience different genres, then it removes a lot of prejudices and preconceived notions. Sort of a literary cultural exchange program, if you will. And the reverse is true, too. If the U.S. were more exposed to other country’s literature, it would do the same for us. I think that’s one of the beauties of the Internet, it is certainly bringing us closer together.

9) Authors when they write generally add a touch of their creative inspiration into what they write and thus make a statement of some of what they believe or doubt. Can you imagine a world of the kind of creatures that Sam contends with or is it a more subtle message?
Not only can I imagine it, I did imagine it. That’s one of the wonderful things about writing. You get to shape your ideas and put them on paper (or on computer memory.)

10) Share with us your favourite authors?
Though I have many, some of my favorites are James Joyce, Robert McCammon, John Dufresne, Jane Austen, Stephen King, F. Scott Fitzgerald, Ernest Hemingway, Flannery O’Connor, and on and on and on.
11) What genre of writing do you prefer?
I’m open to most any kind though I tend to gravitate toward something with an edge to it.
12) Have you ever been frightened?
Yes, indeed – all the time. I don’t know anyone who hasn’t been, do you?
13) Who will you recommend to read Die Laughing?
Anybody who’s looking for a page turner with dark humor, suspense, characters struggling to find themselves, and shape-shifting aliens who can only morph into individuals that have been projected over television airwaves.

14) Please give us links to where we might buy copies of the book.
I’d be happy to. Below is the Amazon link, though the e-Book and hard copy versions can be found anywhere online books are sold, including worldwide. Amazon link: http://www.amazon.com/Die-Laughing-Louis-K-Lowy/dp/061551846X/ref=sr_1_3?s=books&ie=UTF8&qid=1314054983&sr=1-3
15) Please give us more hints on how one might become a best selling author.
I ever become one I’ll be happy to let you know, though I can say it’s nearly impossible to get there without hard work, a thick skin and belief in yourself.