I call him my pirate, for he has the look , the charm and oh yes the ability to keep me riveted on a story. When I read Die Laughing, it seemed incongruous that such a warm person could write a humorous sci-fi that had me angry, horrified and impatient with the characters in the that particular book. Then I had a surprise when his second book came out. It was completely different from the first but just as compelling. Remember it is said that you are only as good as your last Louis however raised the bar with his second novel even though it was in another genre altogether.

That is what I love about writing and good authors, the ability to write in almost any genre and not be stuck in stereotyping that will ultimately stifle you.
Let’s share some comments about Louis’s book PEDAL 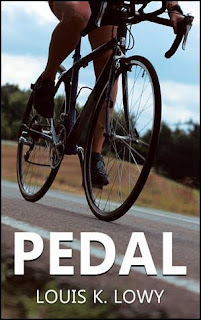 Pedal tells the story of Joanne Brick, a single, 49-year-old elementary school music teacher who loses her job and struggles to reclaim her life back through bicycle racing. Pedal explores how Joanne -- who lives with her bossy, older sister, and their ailing mother – deals with unemployment, loneliness and loss of self-worth.

Pedal is part sports book, part family drama and part romance, but mostly it's a journey of self-discovery and reawakening. It is based around the theme of daring to change and how ordinary people handle life’s turning points.

Pedal runs 88,000 words (301 pages) and was released in December by Assent Publishing.

I had a chance to have what you might call a small chat with Louis, please let’s read together his answers to my questions.
These are the questions I asked him.

Congratulations on your second outing albeit with another publishing house.

Because Pedal isn’t the same as Die Laughing is precisely the reason that I wrote it. I wanted to tell a polar opposite story. Die Laughing, which I love, was a big novel. What I mean, is that it had lots of dire exterior forces going on: shape-shifting aliens plundering the earth’s oil, refinery explosions, falling airplanes and live television broadcasts, all leading to the possible extinction of mankind.
With Pedal I wanted to write a quiet story, yet one where the protagonist had as much at stake in her world as there was in Die Laughing. The disrupting forces in Pedal are more personal, though as I said, just as dire for her. My protagonist has to overcome her own self to save her world, which she lost when the one thing that defined her—her career as an elementary school music teacher—was taken away. I also chose a female protagonist because Die Laughing had had a male protagonist. Whew! That turned out to be quite a challenge.

In one word: incredible. I was fortunate enough to have the wonderful author, John Dufresne introduce me. The audience was larger than I expected, attentive. They reacted to the passages I read in the way that I hoped they would, and then later asked thoughtful questions. For this author, it doesn’t get any better than that. And oh, yeah, they purchased lots of books.

I would like to think I am, but my wife may dispute that point. I’m not one who wears their heart on their sleeve, that’s for sure, but I do tend to be a bit nostalgic and reflective. As that pertains to my protagonists, though each are different, I do like to embed in them the potential to be romantic. They may or may not reach that state, but the opportunity is there.

Though I can see why you think that, the answer is no. My next novel To Dream, is the first of a two book series titled the Anatomy of a Humachine (IFWG Publishing). It’s an epic science fiction drama scheduled for release in mid-2016.  I’m very excited about it.

The reading was held at the wonderful Books & Books in my home town of South Florida, so I was anticipating a good crowd, but when that greatly exceeded my expectations, I was humbled. 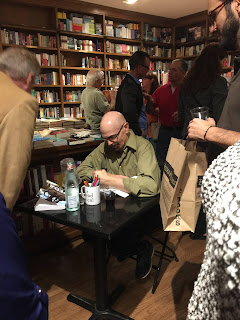 I picked someone like that because I wanted Joanne to be the type of person who had the most to lose when her life-defining career was taken from her. This may sound cruel, but I wanted her to suffer. To have to struggle like she’s never struggled before. To fight for her life, so to speak. That’s what defines a person. She may or may not succeed, but whatever happens I want her to have given it her best shot. I see her as a wilted flower who—if she can overcome her obstacles—will blossom into the woman she wants to be, but never was.

A thrilling sci-fi with a touch of teary romance.

I’m very grateful that people enjoy Pedal and that the Kindle edition is an Amazon Bestseller in Religious & Inspirational Fiction: Women's Fiction and Inspirational. I worked hard on the story and for it to finally get in the reader’s hands and have them tell you how much they like it is a wonderful feeling.

Oh, yes. I’m always working ahead. I’m polishing up a fantasy story about a dying gambler who is given an opportunity to redeem himself, and a turn of the 19th century horror novel. Though I have an outline, I also have to write Book II of Anatomy of a Humachine. Next, I’ll try my hand at a detective novel – of course that’s a ways down the road.

Thank you for sharing time with us.

Thank you, Biola, for the opportunity to speak with you about my work. It’s been a pleasure.
Posted by Unknown at 5:14 PM 1 comment: